We just happen to go to Santana’s Supernatural Concert on the 50th anniversary of Woodstock…not planned…Victor gave me the tickets for my birthday!! 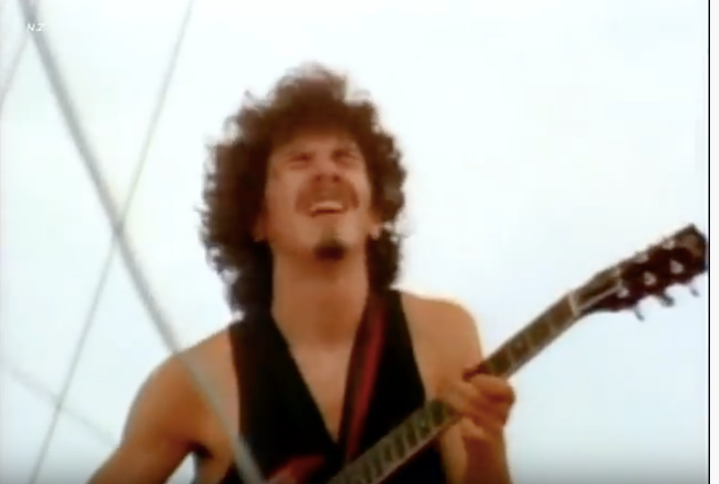 Carlos Santana at Woodstock…  I read an interesting article about him…

“At Woodstock the band Santana took psychedelics thinking they had plenty of time to come down before they performed. Due to schedule changes they had to play a few hours later, while still high on drugs. Santana said he had to play his guitar while it felt like a wild snake he had to tame, he had never played his guitar at a concert while high!!  This is how it Sounded: Soul Sacrifice – Santana (Live at Woodstock)” click here to see the video!!  That performance at Woodstock was the beginning of Carlos Santana’s success!!

I love to be in the presence of someone who is carried away by their passion…for me going to see Sanatana’s Supernatural Tour with the Doobie Brothers,  was just that…

This is what a 65+-year-old might wear to a rock concert…edgy enough without going overboard!!  Black rolled-up jeggings, leopard sleeveless top, Tom’s red canvas shoes, white knit ruffle cardigan, a peace sign necklace for a nod back to the 1960s and red bracelet and silver bangles!! I went on to Xfinity Center’s website to check what I could carry in, it said no purses, no backpacks, only 10X10 clear plastic bags, and cell phone carriers were allowed…so I bought the clear bag at Dick’s Sporting Good Store!!

All set to go see Santana and the Doobie Brothers, it was a very hot and humid day, but turned into a very pleasant evening!!

My clear plastic bag, perfect for carrying everything we needed!! 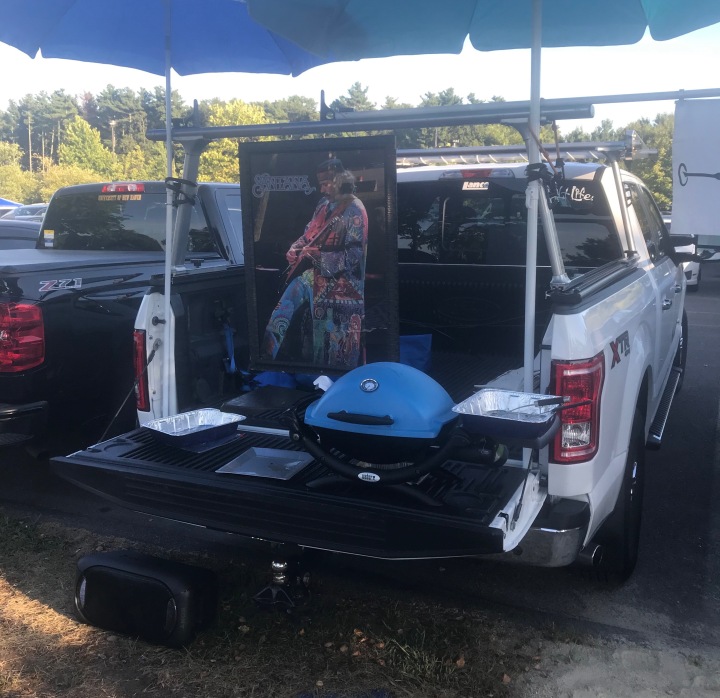 There were lots of people tailgating but I thought this one was very creative…a framed photo of a young Santana overlooking their little party!!!

Here we are at the Xfinity Center in Mansfield, MA, it’s an amphitheater that seats up to almost 20,000!!

We were too far away to get good close-up photos, so these are some from Santana’s website!!  I like the Doobie Brother’s, but not as much as I like Santana!!  A funny story about the Doobie Brothers:  Gina says to me “Mom how did you like the concert?”  I said, “I loved it, but there were lots of people smoking pot, the smell was a little much!!”  She said, “Well you did go see the Doobie Brothers!”  I said, “So what! What does pot have to do with the Doobie Brothers???”  And then she told me😂 Maybe I shouldn’t admit that, but I thought it was pretty funny!!!

Santana playing “Oye Como Va,” I couldn’t believe I was seeing him in person, he and his band were amazing!!  Notice the drummer is a woman, more about her later😉

The band playing “Evil Ways!!”  You can see what we had to put up with in front of us…I wouldn’t mind people standing and dancing if we were close to the stage, but we were not and everyone was sitting back enjoying the music in our section, except these ladies in front of us???  They could have danced in their seats, like I did👍😉

And now for the woman playing the drums!!  We didn’t realize it during the show, but as I was doing research for this post, I realized she is Santana’s wife!!! How cool is that?!!  Her name is Cindy Blackman, Carlos proposed to her during a July 2010 concert!!

I love this quote from Cindy…

“To me, music is completely spiritual, it’s the way you connect with your higher self, with the universe,” says Cindy.   “It’s also a way to share the light with millions of people.  They don’t need to speak your language, have your beliefs, or be in the same place you are.  The music speaks, it channels good energy and makes a difference in people’s lives. Carlos and I are both conscious of doing that.”

And so it is,  Carlos and Cindy brought amazing energy to their concert, that the world so needs today…I think 20,000 people went home uplifted and happy by being in the presence of Santana’s Supernatural Band demonstrating their passions…

This coloring page I did, from my book by Johanna Basford, Enchanted Forest, reminded me of Santana’s vibe and incorporates one of my passions with his…